quoth Nice Pooper Zine, a pretty decent compendium of AMT esoterica, who has this in MP3 on his awesome site

Acid Mothers Sunday Vol 28: Okhami No Jikan - Black Tape (LA-068)
The connection to Acid Mothers Temple on this installment is a bit tenuous, as the lineup to Nanjo Asahito's Okami No Jikan was supposed to be secretive and clouded in black mystery and such, we can only speculate. I honestly hear/don't hear some of Kawabata's playing on these jams, so there is the disclaimer. "May not contain any AMT"

A friend bought this tape at a High Rise show in 1999 at the Khyber Pass to the best of my recollection. I borrowed and transferred to CDr around the same time, but neglected to scan in the cover, so this one is coverless. My apologies. I am sure it was black. This one contains two more versions of their signature tune, "Israel." Both clock in at 15 minutes plus with the second version sounding more like a live recording than the first. It also sounds a bit more like Nanjo's guitar playing. Both jams feature the slow/heavy drums and bass riffage with insane amounts of guitar + effects just blown the fuck over top. And some quiet vocals in there at points. Here is what the La Musica catalog from the time had to say:

068. OHKAMI NO JIKAN / Black Tape
Complete reisue of a mysterious cassette that was only sold at gigs in 1992. Their earliest cool and heavy studio demo recordings featuring the original line-up. The original release was limited to 30 copies.


Man, I wish Nanjo wasn't missing from action. There really seems to be no one like him and in spite of the rumored rip offs and stuff, he did an amazing amount of work to popularize the Japanese underground world wide. I await his return with some sort of black metal superfuzz kill group. Mysterious to a fault? Anyone with more Ohkami or the awesome sounding spin off groups Ohkami No Bohyo or Ten No Ohkami, please post them somewhere and drop me a line or leave a comment. Thanks and enjoy!


this Wetransfer file will expire soon, so grab this while it's still here


http://wtrns.fr/RUtLrv-_1cz-w-s
Posted by mike at 8:28 AM 3 comments:
Email ThisBlogThis!Share to TwitterShare to FacebookShare to Pinterest
Labels: chadbourne, davis, lee, menestres 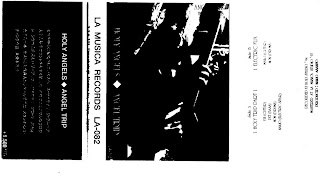 
And that is about all the info I can dig it. It seems this was issued on vinyl at one point, but I never actually saw it or anything."

number 2 on this, so it's coming soon


NEW UPLOAD LINK FROM WETRANSFER get this while you can, these links are not long lasting!


uploaded for request by  "the unameable one"


I kept the megaupload links just in case it comes back again, like jesus

again, with these sendspace files, get them while you can


http://www.sendspace.com/file/usznp6
Posted by mike at 9:40 AM 1 comment:
Email ThisBlogThis!Share to TwitterShare to FacebookShare to Pinterest
Labels: matsG, yoshihide yamanammma eye and yoshihide, what a fucking combo!

sendspace file is active as of 1/21/12, get it while you can, those links don't last long

will keep the Mega location for the time being, it may come back in the future, along with Jesus, of course Gotten these requests so far

will get to at least some of them sometime.

Yoshihide/Eye Wels 2oo2 GOT THIS ONE DONE

Prelapse w/John Zorn--remaster-- 4/18/96
Posted by mike at 8:37 AM No comments:
Email ThisBlogThis!Share to TwitterShare to FacebookShare to Pinterest
Labels: requests

this is the same issue as my ISP (state university) will not allow me to use bittorrent p2p programs. Too many people are doing the illegal things. just stop that?
Posted by mike at 7:31 AM No comments:
Email ThisBlogThis!Share to TwitterShare to FacebookShare to Pinterest
Labels: dead lynx


awesome set, get this!!


no megaupload anymore, but I can reup and send a link to individuals on request, let me know, I'll keep the megalink below, just in case it comes back somehow


anudder kindness from Jorg, thanks!